Since the implementation of currently validated serological (blood) tests, there has been only one nationally reported case where a donor's tissue was found to be the source of a virally transmitted infection, Hepatitis C. The initial testing of the donor was negative, but subsequent tests were positive. There are 26 documented cases of bacterial infection in the past 10 yrs. In 1999 alone, 750,000 allografts were surgically implanted.

There were three reported cases in 2001 of patient deaths after the surgical implantation of allograft tissue in knee surgeries. That report by the CDC sparked a resurgent interest in allograft tissue safety and increasing scrutiny by the FDA and American Association of Tissue Banks.

IMPORTANT: Allograft tissue processors are required to follow mandatory federal and state regulations. The FDA and only two states, FL and NY, require inspection and/or licensure of tissue processing facilities. As of 1/1/05, there are 154 tissue banks in the U.S. and not all of them are certified.

FAQ: How Much Does an Allograft Cost?

The cost of the allograft tissue is borne by the Surgical Facility/Hospital, and they in turn try to get reimbursed for the cost from your Insurance Company. You do not pay for it.

Although the allograft tissue is an additional expense, using one saves the surgeon time and cutting down the time saves the facility money. In the end, it doesn't appear to add much to the cost of the surgery, and may make it less. 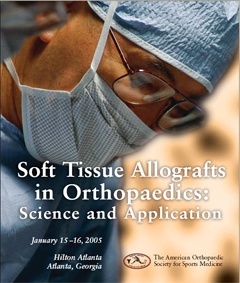 (Most methods unsuitable for tissue)

Reasons NOT to culture first: