Ever wonder where your orthopedic surgeon would go to have his/her surgery?

When doctors nominate other doctors as the best, they are making a statement that is more than a vote of confidence. They are are telling you where they send their patients, their family members and where they seek care.

Dr. Hyman has again been selected as a Top Doctor in Atlanta. The Castle Connolly Top Doctor selection process is entirely merit-based. Doctors cannot pay to be listed on Castle Connolly. The exclusive and elite group of doctors rewarded with the distinction of "Top Doctor" are vetted through a rigorous peer nomination process. Dr. Hyman has been repeatedly nominated and selected as one of the top orthopedic surgeons in Atlanta.

To receive the honor of Top Doctor one time, is a major achievement. But to receive it repeatedly, is the highest honor. Much like making it to the NFL, as a football player, is a major achievement relative to the number of people playing football who would want to be a professional athlete. But to make it to the Pro Bowl, means that the player is the best of the best. Similarly, as Dr. Hyman has been repeatedly selected as a Top Doctor, year after year, he has established himself as among the best of the best. 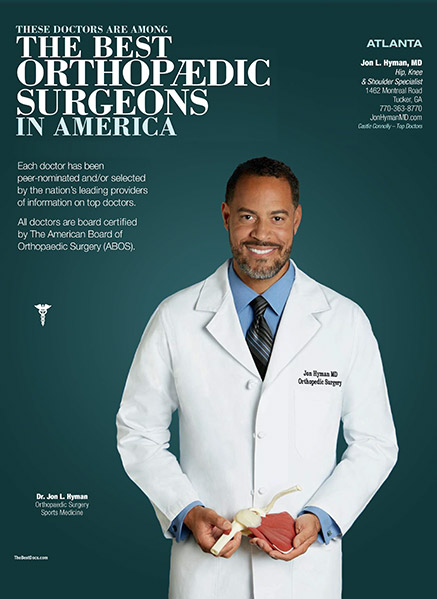 Dr. Hyman has been peer-nominated as a Top Doctor 5 Years in a row. 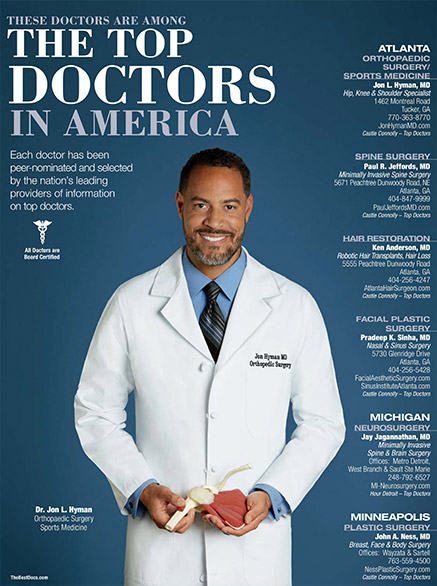 Our surgeon graduated from all of the Top ranked programs in the USA: #1 University, #1 Medical School, #1 Orthopedic Residency Training and the #1 Sports Medicine Surgery Fellowship. Dr. Hyman has also repeatedly been selected by his peers as "Top Doctor." Through VIP Orthopedics, we aim to provide patients with the most state-of-the-art, technologically advanced, compassionate and comfortable care possible.

By providing convenient "Equally Elite Care," the public receives access to the premium caliber of surgeon that many other orthopedic surgeons would choose (and have chosen) for themselves, their families, or their patients with complex problems. Many of our patients are referred by other surgeons, based on our track record of excellence and experience, for specific, technically challenging, surgeries. Our surgical expertise and supportive services put us among the best in the healthcare industry, and establish us as a Center of Excellence.

Dr. Hyman performs the most advanced minimally invasive technique surgeries in a state-of-the-art Advanced Orthopedic Surgery Center of Excellence. Our facility generally offers a lower cost, exceptionally efficient platform for our patients. The patient experience is much better than that for procedures at a Hospital.

Not everyone has access to a champion surgeon or the latest, most sophisticated surgical technologies. Dr. Hyman continues to be involved in philanthropy and charitable care, in the United States and overseas. We believe the gift of being a surgeon comes with a professional obligation to provide care to those in need, regardless of the ability to pay, particularly to those in need of urgent care.